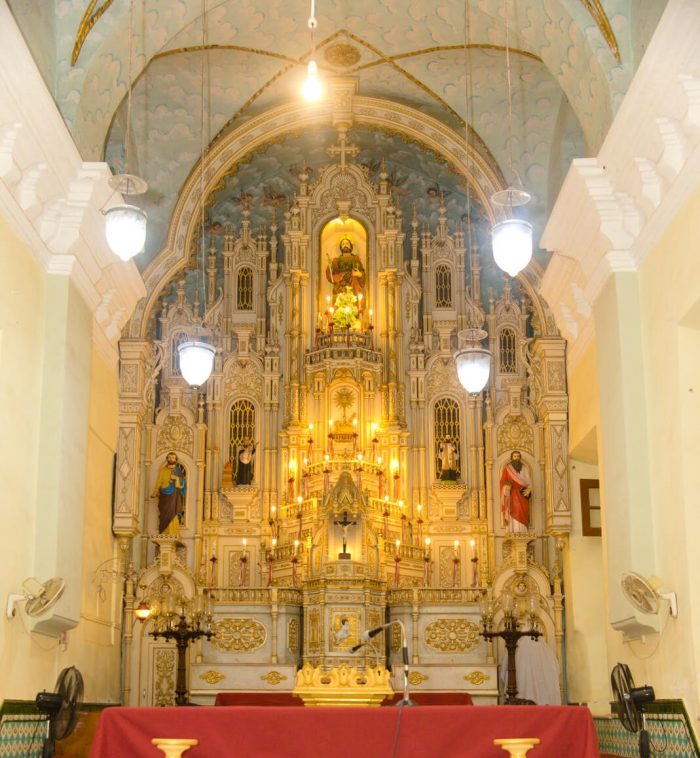 St. Thomas church Aldona is situated in North Goa, almost 8 kms from Mapusa. The Church inside is ornately decorated with symbolic murals depicting stories from the Bible and also with grand statues. The Feast of St. Thomas is celebrated with pomp and gaiety on the 2nd Saturday following Easter. St.Thomas was chosen as the patron since the inception of the parish.

Aldona is the seventh parish established by the Franciscans in Bardez. They started their ministry in Coimavaddo, where they built the original church of the village, in the year 1569.

The parish has grown, from its humble beginning from a chapel built in 1569 by the Franciscans, to its present stature. Since then, the Gospel seen sown by the Franciscans sprouted so rapidly that at the turn of the century, i.e. in 1596 the present site was chosen as being more central. About 1890 there was a move to shift the church to the Trecena and Mr.Caetano Costa volunteered to bear the entire cost. This move, was, however, proved abortive, and subsequently, many additions like the staircase and the courtyard were built by Fr. Joao Francisco Lobo, whilst the cemetery has been in existence since 1783. Whereas, the existing sacristy and parochial residence was were added in 1898.

THE INCIDENT THAT INCREASED PEOPLES FAITH AND GRATITUDE TOWARDS ST.THOMAS IN THE LATE 1800’s

The people’s reverence and gratitude to St.Thomas reached it’s peak, on October 29th 1895, When the peaceful village was suddenly turned into a minor battlefield. The villagers were aroused at the dead of night by the blaring of trumpets and conchshells.

A band of robbers had crossed the Corjuem ferry to loot and plunder the church. Having broken down the main door they entered the scared precincts, and tried in vain to break open the iron safe. They abandoned the attempt  and planned to enter the sanctuary but were petrified to find, according to eye witness, an angelic figure with a drawn sword blocking the entrance.

Meanwhile the villagers having heard the alarm gathered with spades, scythes, bamboos, brooms, sticks to meet the invaders. On attempting to flee they were pelted with stones in all directions, 16 were killed, 4 were taken as prisoners and the rest drowned whilst attempting to escape. In commemoration of this unique event the ‘Choranchem Fest’ or ‘Robbers feast’ is celebrated annually on 29th October. 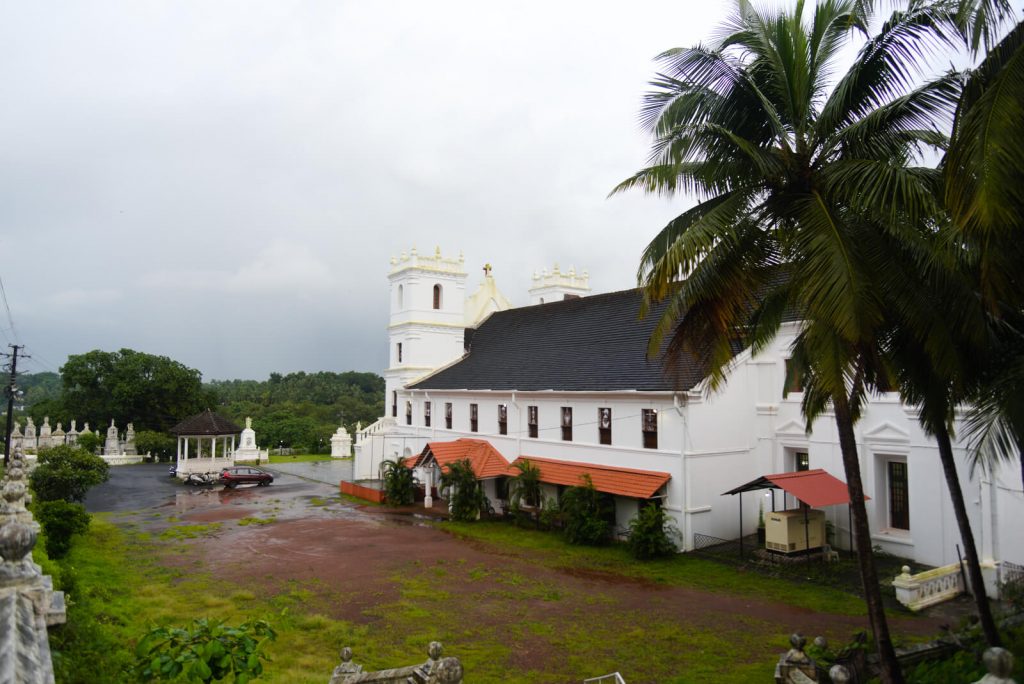 1569: The Franciscans built a Chapel in Coimavaddo, Aldona as they began their work by establishing a Christian community in Aldona. The responsibility of spreading the Gospel in Bardez had been allotted to them, They may have set foot in Aldona a year or two before building the Chapel

1596: The Christian faith took firm roots in Aldona with the zeal of the Franciscans and the enthusiasm of Aldonkars. A centrally located new Church, at the present site, was built in 1596 to accommodate the growing number of people who embraced the Christian faith. The work of enlarging and renovating the Church, as per pastoral needs, has continued as and when required ever since its establishment.

1767: The Diocesan Clergy was given the responsibility of the St. Thomas Church, Aldona, which had been till then under the care of Franciscans.

1800: Our Lady of the Pieta Chapel was established in Quitula with a resident chaplain.

1855: Mae de Deus Chapel was established in Corjuem with a resident chaplain.

1864: St. Rita of Cascia Chapel was established in Carona with a resident chaplain.

1895: A great robbery of the Church was averted by the parishioners who gathered in large numbers to fight back the gang of robbers who had marched in to plunder the Church and its treasury. The success of this brave act of the parishioners responding to the ringing of the Church bells was attributed to the miraculous intervention of St. Thomas, the Patron Saint.

1898: The St. Thomas Church was declared the seat of the dean of the Aldona deanery consisting of several neighboring parishes.

1915: Santa Cruz Chapel, Panarim, was declared a public oratory where the Eucharist is celebrated every Sunday.

1952: The Legion of Mary established in the Parish.

1973: The Conference of St. Vincent de Paul established in the Parish.

1973: The Catholic Youth of Aldona started in the Parish and continued till 1986.

1974: The Charismatic Renewal Movement began in the Parish.

1996: The Fourth Centenary of the Church celebrated.